We started with a kinesthetic activity where we rolled "weighted dice" and moved around the room according to the different locations water might occupy: clouds, lakes, rivers, ocean, soil, ground water, glacier, plants animals, and then drew a representation of the different phases of the cycle. It struck me that the water cycle is less simple/circular than it has sometimes been depicted in in science text books. 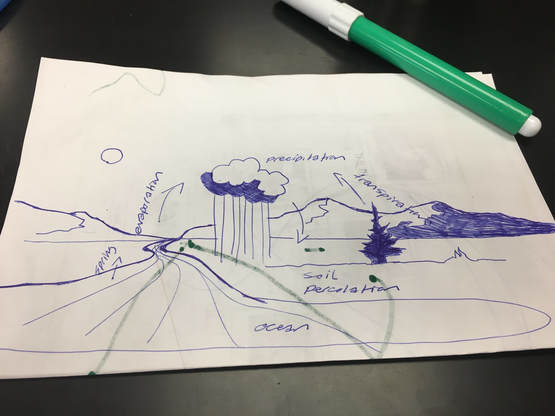 Sketch of the phases of the water cycle based on the kinesthetic activity.

Next we went outside on campus armed with hand lenses and practiced investigating the natural world around us. The goal of this activity is to help students make careful observations while encouraging wonder and curiosity through the following 3 prompts:
​
I notice...
I wonder...
It reminds me of...

In the age of Google, this type of first hand experience might be more pertinent than ever. While Google does act like a collective brain that levels the playing field by providing convenient access to information (to a certain degree), it can not substitute for making your own authentic discoveries and may even foster academic negligence i.e. too readily accepting the established canon, or assuming the work has already been done or the answers are already out there.

I think inquiry fever would be a great way to develop an essential question/prompt to answer in an inquiry based learning model.

We finished the day with a conversation about the definitions and importance of wetlands and riparian zones, placing objects on a Venn diagram according to analogies we created for their corresponding roles in the overlapping ecosystems.

The conversation gave me a greater appreciation for the critical role these areas play in supporting life from the smallest aquatic invertebrates all the way up to the large ungulates who use these areas to procure shade, water, protection and food.

We started the day at Cooper Ranch along a side channel of the Gunnison river and learned how to collect macroinvertebrates along the river banks and underneath rocks.  We then spent some time drawing/describing them in our journals and then took turns sharing our discoveries at the macroinvertebrate "convention." 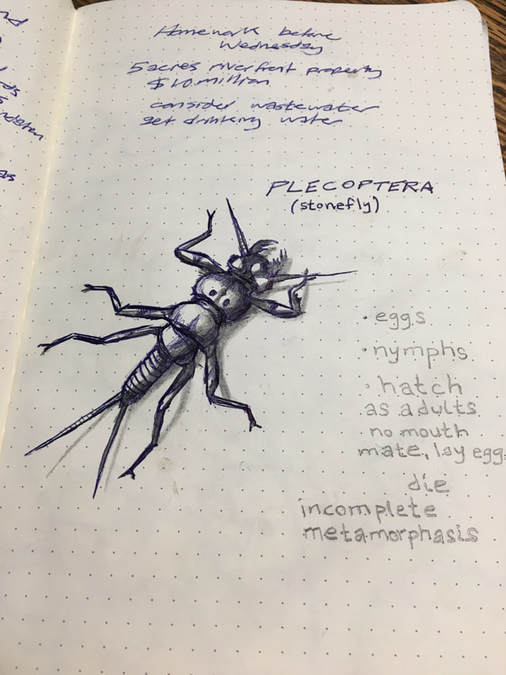 Journal entry/sketch of a stonefly we mined from beneath a river rock.
This may have been my favorite activity of the workshop, not only because I am a fly angler, and an art teacher and enjoyed both getting to know the insects I often use to catch trout and getting to sketch one in detail, but because I identified an opportunity to create a cross-curricular lesson out of this activity by repeating it with my high school art students.  I think they would enjoy the "alien" appearance of the bugs, and expect the drawing would turn out to be quite interesting from an aesthetic perspective, especially if we enlarged them, put some more time into the details, and used color.  I think this activity will become the basis for my lesson plan.

Later we took some time to map out a section of river as if observed from an aerial vantage point.  The intention here was to identify the different features of the river that effect flow and currents, creating different features like eddies and pools that might support habits for different aquatic species.  I also enjoyed this activity for the chance to practice my art skills (although that was not the objective), and could see myself using this one with my students as well, perhaps even combining it with the $10 million riverfront property activity we did later in the course. 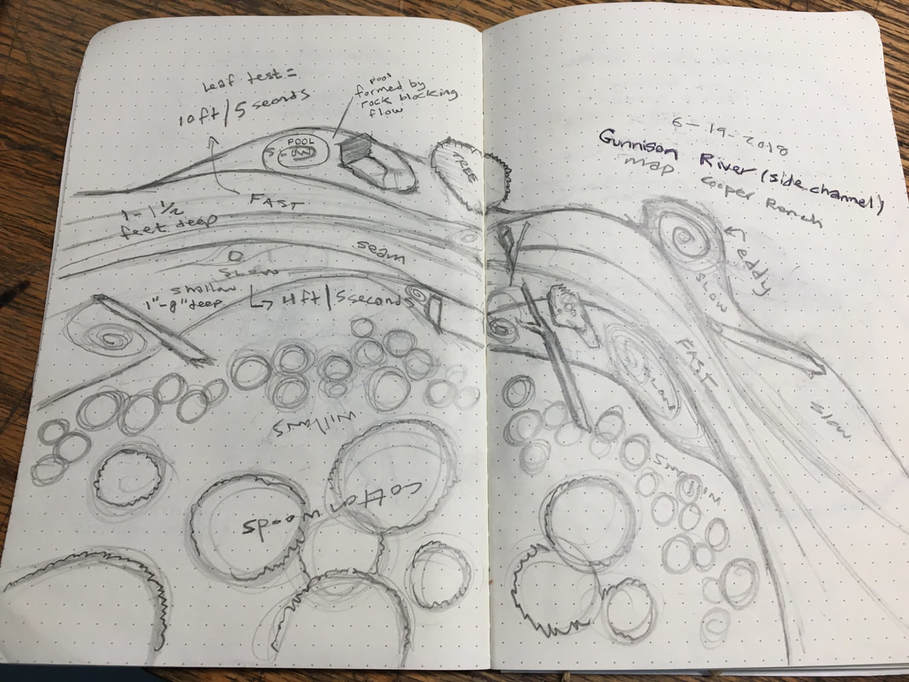 River map of a side channel of the Gunnison, notice the obstacles that disrupt the flow of the current and create eddies.

After an informative visit from a national park ranger during which we learned about some cool opportunities we can take advantage of both in person and via distance learning, we dove into some river chemistry.  I will admit that as a teacher of fine arts, this portion of the course was a learning stretch for me but I enjoyed making the measurements and it gave me a better understanding of water "quality" and what parameters are necessary to provide a healthy environment for life to thrive in a river.  After taking our measurements, we concluded that the Gunnison (at this stretch) is a healthy river with 11 mg/liter of dissolved oxygen (see other metrics in the photo of my journal notes below, I left my phone charging in the classroom on this day so consequently only have photos of the notes I took).

Most of the remaining time during day two was spent using both advanced and more traditional methods of measuring the river's flow.  My colleague Scott Nykerk and another teacher used the more sophisticated flow, meter while another group of use measured out a 90 meter section of stream and used the orange drop method, where you record the amount of time it take for an orange to travel the 90 meters 9 different times in 3 different parts of the current: middle, left and right.  We than calculated an average velocity at about .88 meters/second.  This turned out to be quite accurate when compared to Scott's result with the flow meter.  If you took the velocity and combined it with the volume at a particularly cross section of the river you could also calculate the cubic feet per second or CFS which is the metric most commonly used in conversations on river flows, at least in America.  One CFS is about the equivalent volume of an inflated basketball.  We're short on basketballs with the drought this year!

We concluded the day by learning some nature journaling prompts which I enjoyed, they gave the journaling experience a bit more structure that could be quite helpful with certain students.  I especially liked the activity where we all drew a a similar willow leaf and then had to put the leaves in a hat and try to identify them by the drawings alone.  This felt easily adaptable to the art classroom and is an effective way to teach students to notice the details.

Jesse who works with Trout Unlimited at the national level paid us a visit at a diversion structure along the East River and talked about their instream flow program where the Colorado Water Conservation board purchases water rights to keep water in the river rather than use it for agricultural or industrial purposes.  These are generally junior water rights and as such are not guaranteed in low flow years like we're experiencing now, but they are a step in the right direction to preserve habit for trout and provide opportunities for recreational river users (anglers, boaters etc.).

Trout unlimited organizes various river cleanup, habitat restoration, and conservation projects that make our rivers healthy environment to support fish, so that angers may continue to enjoy catching them for generations to come.  While TU's motive for river conservation may be somewhat self-serving, the personal enjoyment of angling, the ripple effect of their efforts extends to non-fishermen and other wildlife i.e. we all benefit from clean water and healthy riparian habitats.

Our next stop was the the Roaring Judy Hatchery, also along the East river below Crested Butte.  Hatchery worker Seth Firestone took us on a tour and explained the process of taking a Kokanee Salmon from egg to fingerling when they are released in the East river and find there way to Blue Mesa reservoir.  I enjoyed eating one of these hatchery salmon from Blue Mesa that my friend John caught with his father on Father's Day just before the teacher institute started and I must say it was rather tasty, much thanks to the Roaring Judy Hatchery!

Although we didn't get into it, the existence of fish hatcheries brings up some interesting ethical questions for me.  The hatchery program has been around for over 100 years in Colorado now, and one of the oldest hatcheries is on Mitchell Creek in my own backyard of Glenwood Springs.  They were presumably started because of over-harvesting, and the attempt to restore fish populations is commendable, but it's hard not to view the practice as humans tampering with nature.  I supposed we tampered with it in the first place by overfishing, but I can't help but wonder what other ramifications the introduction of more fish might have on the ecosystem, particularly when they are non-native species like the the popular rainbows, browns, and brook trout that thrive so well.  The obvious unintended consequence has been the decimation of the native cutthroat population which the CPW and organizations like TU are now trying to remedy with somewhat limited success.

We finished our visit to the hatchery by spending some time with some other CPW employees/biologists and doing some activities that involved identifying fish, creating public service announcements and playing a tag game where we were either Kokanee Salmon or limiting factors (anglers, brown trout, diversion structures etc.) all of which would be great options to expose students to river ecology. 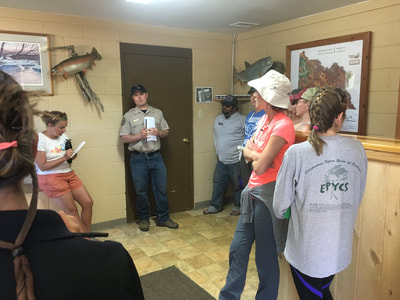 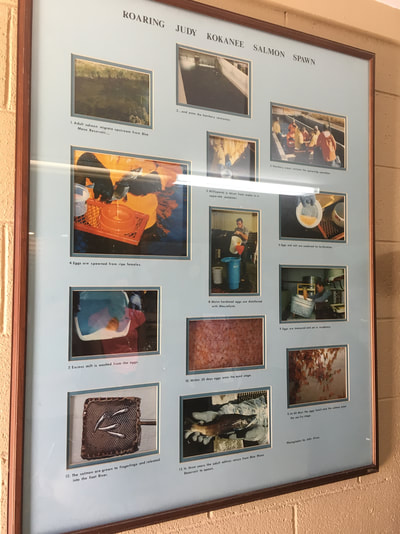 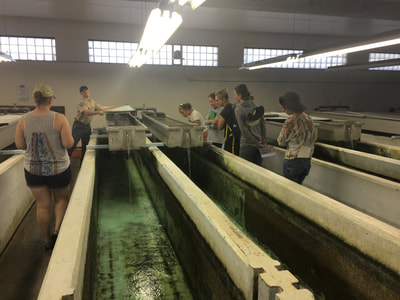 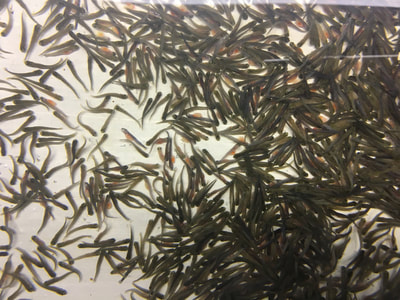 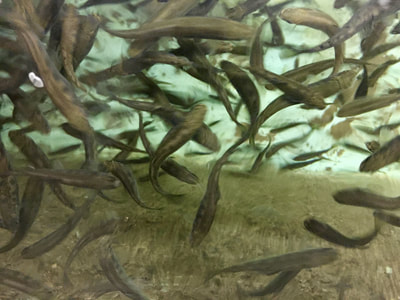 We concluded the course by sharing our homework assignment where we were to "develop" a 5-acre section of stream front property with a $10 million budget.  We pieced our properties together and then took turns explaining our plans and collecting "pollutants" and watched as they amassed downstream.

This was a fun lighthearted activity but also an effective reminder to be good stewards of the river, I myself live about 100 yards from the shore of the Roaring Fork.